Bollywood is not only an industry but a platform for arising actors to become famous in a go. Each of us wonders how much money the B-Town stars are making and who is the richest of all. So, to satisfy your curiosity, we here below, providing you the list of the top five richest actors of B-Town. 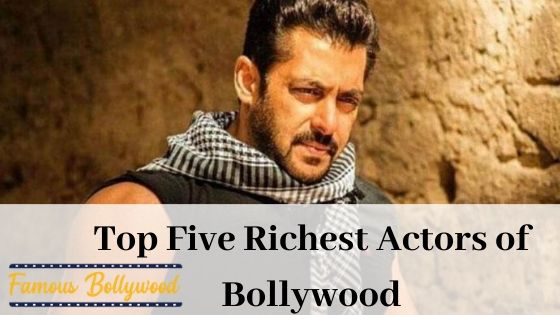 The Top 10 Richest Bollywood Actors of Bollywood is the King of Romance- Shahrukh Khan. He is the Badshah of B-town, not only in acting but in the net worth too. The net worth of the actors is 5250 crores in Indian rupees. Shahrukh has both name and fame and multiple sources to make income, thus he is the richest actor in the industry.

The Big B in tinsel town is still a powerful actor and his presence in the movie confirms success. He is a steel actor who is in town for five decades. He charges 20 crores for a film and does very limited roles. Also, he charges a whopping amount of 2.5 crores per advertisement. He is associated with brands like Dabur, Navaratan Oil, Kalyan Jewelers, ICICI Prudential Life Insurance, Gujarat Tourism, Tata Sky, Dairy Milk, etc.

The Bhaijaan-Salman is the third highest-paid actor in Bollywood. He himself is brand and the name of this actor has a great influence in B-Town. He has one of the longest presence in the industry and thus has earned a heavy net-worth of INR 2150 crores. He charges 60 crores for a movie and also owns a brand called “being Human” But the income from the brand is spent on the people in need. For every endorsement, he charges Rs 4 crores per day per ad.

Our Mr. Perfectionist aka Amir Khan is the fourth richest actor of Bollywood. With his outhe box concepts, he not only impress the audience but collects a big amount with each release. With the fee of 60 crores for each movie, Amir has a wealth of INR 1260 crore. He also owns a production house namely Aamir Khan production and endorses brands like Coca-Cola, Godrej, Titan Watches, Tata Sky, Toyota Innova, Samsung, Monaco Biscuits, Snapdeal, and Vivo.

The Khiladi of B-town Akshay is the fifth richest actor in the industry. He is also the seventh highest-paid actor in the world. He is one of those actors who never fails on box-office when it comes to collect the highest grosses with their movie. Apart from movies, the shares of Akshay’s income comes from brands like Honda Motorcycles, Thumbs Up, Pepsi, Micromax Mobiles, Relaxo, Dollar Club, LG Electronics, Manappuram Gold Loan, Red Label in his capacity as a celebrity artiste.

Posted by Famous Bollywood at 04:47

Famous Bollywood
We are providing all information of Bollywood industry. you can visit for latest Bollywood news.